From price increases to shortages of skilled labour, industrial companies are under increasing pressure to meet demands for quality, volume and speed. In a pilot project, KUKA and HELLER, a producer of CNC machine tools, have developed a solution to these challenges: A KUKA KMR CYBERTECH, which automatically loads and unloads machines with tools and provides relief to employees.

Low quantities, high complexity – and naturally, everything as quickly as possible. Individual customer requirements pose challenges for industrial companies. This is in addition to a shortage of skilled workers along with rising prices for raw materials and services. The solution? More automation. While automation solutions are already well advanced in such areas as palletising, handling or assembly tasks, tool automation – the flexible and automated loading and unloading of machines with tools – is still in its early days. Together with KUKA, the HELLER Group has launched and implemented a pilot project that aims to close precisely this gap. 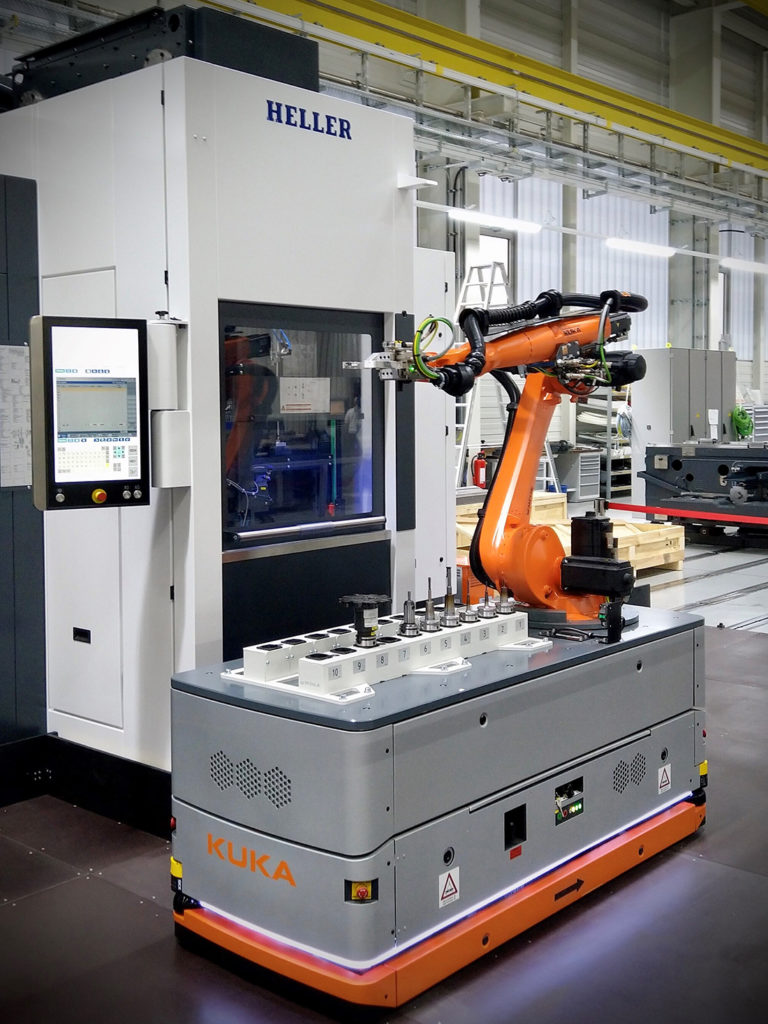 “There is a lot of potential in this area. It’s not just about automating in front of the machine, but behind it as well,” said Robert Eber, who is responsible for pallet and robot automation at HELLER. The group manufactures state-of-the-art CNC machine tools and production systems for machining at five production sites worldwide. Founded in Nürtingen, Germany, in 1894, the company’s customers include numerous companies from the areas of general mechanical engineering, energy technology, fluid technology, the aerospace industry, the automotive industry and their suppliers, as well as from many other industries. HELLER had already used robot-based solutions from KUKA for tasks earlier on. However, the two companies worked together in partnership for the first time during the pilot project to develop a marketable solution in tool automation.

From customer inquiry to pilot project

The collaboration started with the aim of finding out which manual processes can be automated and where the limits lie. “We contacted HELLER and asked whether they saw a need for mobile robotics, and a direct yes was the answer. This then gave rise to the initial ideas, concepts and ultimately our pilot project,” reported Steffen Günther, Global Business Development Manager at KUKA. The two companies launched the project in the spring of 2021, and a good year and one or two challenges later, the solution was finally found.

KMR CYBERTECH takes on the job

Using information from the production order provided by employees, a host computer from CERTA determines which tools the machine needs. It orders the KUKA KMR CYBERTECH to fetch the appropriate tools from the warehouse. The mobile platform, powered by omnidirectional technology and a KR CYBERTECH installed on it, gets going. “The KMR CYBERTECH was the optimal product for this since we have a maximum weight of up to 20 kilograms for the tool holder,” noted Steffen. The robot arm grips the relevant tools and places them on the appropriate fixtures on the platform. The journey then continues from there.

The KMR CYBERTECH brings the parts to the appropriate machine and places them where they are needed. “The automated solution eliminates the need for the employee to walk to the machine and insert the tools. This allows us to shift the focus of manual work,” explained Robert. In this solution, the KMR CYBERTECH not only takes care of the loading and unloading but also handles exchanges. For example, when the host computer receives information about a worn tool, the platform makes its way to the relevant machine. The tool is unloaded and taken away. A new tool is then picked and inserted into the machine.

Communication is what counts

During the development of this solution, the communication between all the systems involved was particularly challenging. “What data are available at what time and where? The biggest challenge for us was the interfaces for data exchange,” said Robert. Thanks to the combined automation expertise of KUKA and HELLER, a suitable way was found after a number of tests in order to allow the mobile platform to do more than just move from A to B. The platform is now provided with the necessary information on an ad-hoc basis. This allows it to know exactly what needs to be done at any given time.

A second requirement was also to be implemented during the pilot project. “We wanted to change as little of the manual operation as possible,” Robert continued. “That is, employees should also still be able to insert tools and manage data if necessary.”

The project has now been completed, and the feasibility has been confirmed. The communication functions properly, and both humans and robots can now load the machines with tools. “We are now monitoring the market and are ready to move to the next level and respond to customer requests,” stressed Robert. For KUKA, too, it was the first major project with mobile robotics in the field of tool automation. Steffen is convinced that this will offset the shortage of skilled workers and strengthen industrial companies. “Mobile robotics can perform this work 24/7, and skilled workers can focus on their competencies as well as more value-added activities.” The foundation has been laid, and the cooperation with HELLER has already generated initial customer projects and offers. The task now is to integrate this forward-looking project into the production halls of other tool manufacturers.