Despite major technical advances in process, control and plant environments in recent years, workers still face a wealth of mechanical hazards – in particular to their hands.

According to the HSE, process, plant and machine operatives in the UK’s manufacturing sector(1) have significantly higher rates of injury compared to workers in other sectors. In particular, contact with machinery and handling, lifting or carrying injuries are two of the most common issues.

This is reflected in a survey undertaken in the manufacturing sector by the European Union Occupational Safety and Health which revealed that for 85% of businesses(2), protecting workers against machinery and tools was the biggest health risk they faced.

And as technology within plants have increased so too has fibre and materials technology used to manufacture protective gloves.

In fact, so fast has their development been, that they outpaced traditional testing standards, driving the introduction of a new EN 388:2016 standard.

Although EN 388:2003 results were seen as a satisfactory indicator for lower cut resistance gloves, a number of flaws were identified for higher cut resistance (cut Level 4-5) ones, grouping together gloves where potentially large performance variances existed.

Why Did It Matter?

Accurate data is an essential element of a successful hand protection programme. But the pace at which fibre technology developed was making it increasingly challenging for H&S professionals to determine exact levels of cut performance using old EN 388 data. The scoring categories were not able to accurately reflect the performance variances seen in higher level cut resistance.

So enter EN 388:2016 providing accurate performance data to enable a more informed decision about the level of protection offered by a specific glove.

Whilst manufacturers can introduce gloves on to the market with EN 388: 2003 certification until 21st April 2019, it is important to understand what the new standard means now.

Many of the fundamental aspects of EN 388:2003 remain. The test determines a protective glove’s performance against the primary mechanical hazards:

Every glove achieves a performance rating expressed by a pictogram, followed by four numbers representing performance against each specific hazard. The higher the numerical rating (0-4 for abrasion, tear and puncture / 0-5 for blade cuts), the higher the protection offered.

New to the Standard

Two new cut tests have been introduced, including one using the EN ISO 13997 approach.

The ISO 13997 (TDM) has become the reference point for EN cut protection. Performance levels remain the same as the 2003 version, with one significant exception; there are now six letter-based classification levels.

Results will be categorised as follows:

In addition, new testing protocols covering abrasion and impact resistance have been created.

Under the new test, the type of abrasive paper used for the test has changed. To measure the abrasion resistance, the glove material is fitted to a Martindale abrasion machine and the rubbing head moves over the material in an elliptical motion over a table covered with 180 grit abrasive material.

The number of cycles required to make a hole in the material will relate to the 1-4 level of abrasion performance.

This test is carried out in accordance with EN 13594:2015 6.9 Protective Gloves for Motorcycle Riders. The protective material/area is tested by being secured to a domed anvil and impacted with a 2.5kg flat face striker and energy of 5J. Gloves must meet the requirement of level 1 of EN 13594:2015 – the mean transmitted force shall be ≤7.0kN with no single results greater than ≤9.0kN.

These results are reflected in a new pictogram performance format: 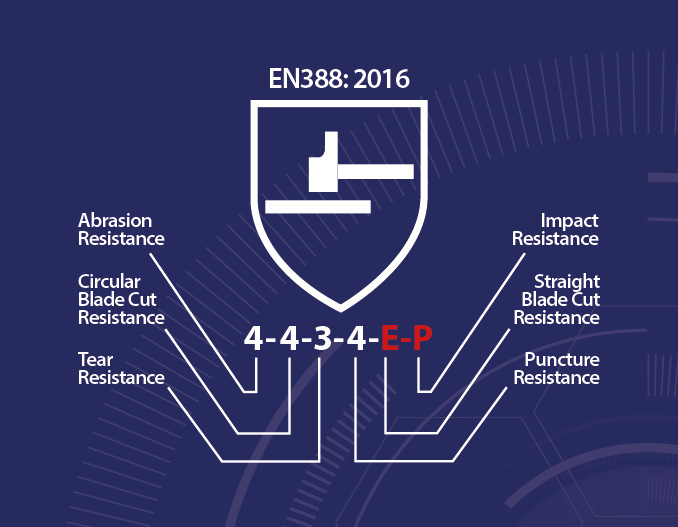 The new EN 388 standard provides H&S managers with better performance data to guide hand protection decisions. It’s important to remember that the most effective protection from cuts is a combination of many factors. Not just the fibres of the glove or the number achieved from a cut score.

Education and training also plays a massive part in helping bring down the hand injury rates.