London, 23 March 2016 – Bioplastic technology company Floreon Transforming Packaging Ltd has been recognised at the 2016 Duke of York’s Pitch@Palace initiative, part of The Prince Andrew Charitable Trust. This marks a significant step for Floreon as it looks to challenge perceptions within the industry and encourage the uptake of its patented, high performance plastic made from renewable resources, using plants as a raw material.

Shaun Chatterton, CEO of Floreon, said: “Typically plastics are made from diminishing crude oil resources, which suffer from significant fluctuation in price and an unsustainable future. From the uncertainty of sustainability, the environmental impact and concern of increasing prices, we are increasingly seeing a move towards the use of renewable resources for plastics packaging.”

Floreon is a blend of a standard bioplastic polylactic acid (PLA) and other carefully selected biopolyesters, which result in a resin that is much tougher and easier to process than current materials. It also has the potential to expand the use of bioplastics and replace other plastic derivatives. The patented technology is suitable for a wide range of plastic applications, but with improved mechanical, physical, chemical and thermal properties. Credited for its toughness, higher strength and durability compared to standard PLA, it is also recyclable, biodegradable and requires far less energy to process compared to rival products.

Dr. Andrew Gill, Technical Director, Floreon, explained: “What makes Floreon different is that we have significantly boosted the performance of PLA without adversely changing the nature of the material. Our additives are effective at very low addition levels, maintaining a high level of biobased content without compromising the compostability or safety of the material.

“Instead of simply comparing Floreon with other bioplastics, independent testing has shown that it can outperform competing plastics such as PET and polystyrene in terms of mechanical performance. While we recognise the success story of PET recycling and respect that we won’t replace the material in every application, such as soft drink bottles, it is clear that newly established bioplastics offer significant opportunities for the future in terms of both production, functionality and end of life options.” 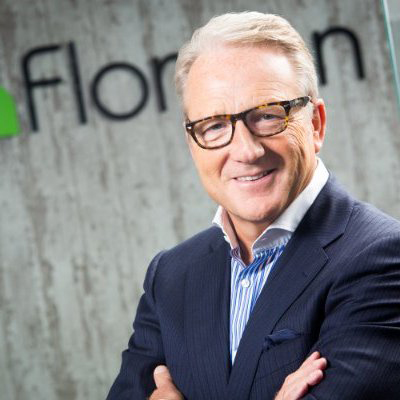 Another benefit of Floreon is that it requires far less energy to process compared to rival products. Testing at the University of Bradford has shown that Floreon requires up to 40% less energy during the manufacture of products such as sheet, even compared to PLA which can be converted at relatively low temperatures already. It is also fully recyclable, can be disposed of by industrial composting or used for energy or feedstock recovery. In comparison, PET can only be recycled, recovered or put into landfill where the many plastic products still end up today.

The advantage of the groundbreaking nature of Floreon is that is creates a 100 percent sustainable circle of life. The latest research reveals that global bioplastics production capacity is set to increase from 1.7m metric tons to approximately 7.8m metric tons in just three years. This means the resulting opportunities for bioplastics materials far exceeds plastic packaging with many other sectors including textiles, automotive applications and consumer goods recognising the benefits and end of life options available.

Chatterton added, “It was truly an honour to be recognised as one of the 14 entrepreneurs invited to take part in the Pitch@Palace final. There was strong competition, with many finalists showcasing innovations in the medical, consumer healthcare and research technology sectors. Reaching the final was a fantastic opportunity to showcase our product and explore opportunities with potential industry influencers. The response has been remarkable and we’re excited to continue highlighting the benefits of Floreon to the wider industry.”

The Pitch@Palace final took place on Monday 7 March at St. James’s Palace. Floreon was first selected as one of the successful businesses at the Pitch@Palace On Tour event in Manchester at the Alderley Park Conference Centre. It successfully completed the Pitch@Palace Boot Camp, beating over 42 entrepreneurs, winning the chance to deliver its three-minute pitch to the Duke of York and panel of judges.