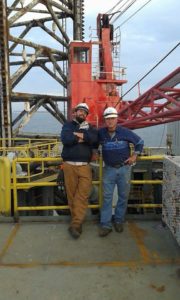 A US-based specialist in the supply of complete electrical packages for oil rig cranes is using Control Techniques AC and DC drives as part of a landmark $500,000+ order involving the upgrade of 10 LeTourneau cranes. Three cranes have already been completed with no reported down-time in the first 18 months of operation, whereas prior to the upgrade, maintenance would be required on a weekly or even daily basis in some instances. The financial benefits for the oil rig operator are proving substantial.

Headquartered in League City, Texas, JC’s Marine Oilfield Services was established in 1992. The company’s Power & Distribution Division specialises in a variety of motor control solutions that are customised to match the needs of oil rig cranes, as well as drilling barges, supply vessels and land rigs.

When a Texas/Louisiana-based customer was seeking an electrical contractor to help upgrade the drive systems on 10 LeTourneau oilfield cranes, JC’s Marine Power & Distribution was in prime position to secure the order thanks to its technical support and AC/DC capabilities. As a long-standing advocate and user of drive technologies from Control Techniques, the company proposed the use of a Unidrive SP AC variable speed drive for the boom, and two Control Techniques Mentor MP series DC regenerative drives for the swing and hoist.

“By changing to a Control Techniques variable speed drive for the boom we can ensure complete control over the speed and rate at which the boom moves, so that loads up to 50 tons are ‘feathered’ rather than ‘banged’ to the ground,” said Mr Costanza.

“I’ve been operating with the new system for 12 months and have not had one issue,” said Justin Hillard, LeTourneau crane operator on Atlantic 7 rig. “The controls are user friendly, very smooth and have a wide variable speed in hook, swing and boom. In my opinion the boom is the biggest operating improvement. With its variable speed you can ease into boom and keep the load stable and personnel safe on deck.”

Jason also praised the increased safety afforded as a result of the new system: “The crane is also much quieter without the motor-generator sets running; you can hear what the crane is doing and what’s going on around you. I’ve also noticed that if you’re in a position where you cannot see the hook, you can actually hear the hook motor running and know how fast the hook is travelling. I highly recommend this system, it’s safer, smoother, quieter and virtually maintenance-free.”

Further benefits delivered to the end user as a result of AC and DC drive technologies from Control Techniques include conformal coating on the PCBs, which helps impart protection in marine environments, while the large working temperature range is also advantageous.